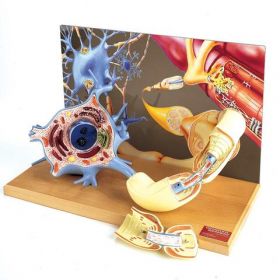 Magnified more than 2500 times and fully three-dimensional, this neuron model is depicted in its natural setting. With the membranous envelope cut away, the cytological ultrastructure, organelles and inclusions within the cell body are depicted in contrasting colors. A section of the axon lifts off to expose the enveloping myelin sheath and neuro-lemma, as well as the Schwann cell that formed them. Dendrites of the neuron extend into the background, and synaptic vesicles carrying neurotransmitters can be seen via a cutaway view. 54 features are identified in an illustrated key.motor Neuron Diorama Anatomical Model