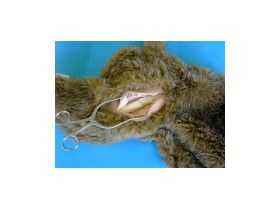 An optional extra or add-on feature to either the Canine Critical Care Manikin JERRY as LFA #2570A or Canine Advanced Airway Manikin JERRY as #2602A can now be included – a long oblique fracture of the right femoral leg bone.

This custom feature will allow students to learn how to set and repair common K-9 fractures.

Suture Patch II is transparent to allow students to study and analyze their handiwork while allowing them to practice their suturing on a larger surface area. Mimicking the turgidity and resistance of real skin, this patch can be used repeatedly. Incisions can be made over the entire surface of the patch.